In a country with vast oil wealth and lavish royalty, an estimated quarter of Saudis live below the poverty line 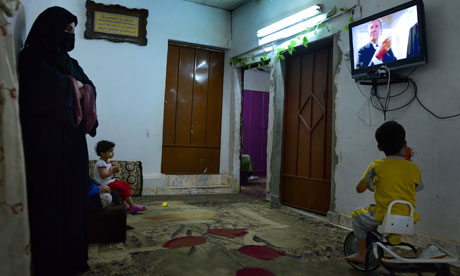 The children of Souad Al-Shamir watch television in their living room in Riyadh, Saudi Arabia. Photograph: Linda Davidson/Washington Post
A few kilometres from the blinged-out shopping malls of Saudi Arabia's capital, Souad al-Shamir lives in a concrete house on a trash-strewn alley. She has no job, no money, five children under 14 and an unemployed husband who is laid up with chronic heart problems.

"We are at the bottom," she said, sobbing hard behind a black veil that left only her eyes visible. "My kids are crying and I can't provide for them."

Millions of Saudis struggle on the fringes of one of the world's most powerful economies, where jobs and welfare programmes have failed to keep pace with a population that has soared from 6 million in 1970 to 28 million today.

Under King Abdullah, the Saudi government has spent billions to help the growing numbers of poor, estimated to be as much as a quarter of the native Saudi population. But critics complain that those programmes are inadequate, and that some royals seem more concerned with the country's image than with helping the needy. In 2011, for example, three Saudi video bloggers were jailed for two weeks after they made an online film about poverty in Saudi Arabia.

"The state hides the poor very well," said Rosie Bsheer, a Saudi scholar who has written extensively on development and poverty. "The elite don't see the suffering of the poor. People are hungry."

The Saudi government discloses little official data about its poorest citizens. But press reports and private estimates suggest that between 2 million and 4 million of the country's native Saudis live on less than about $530 a month – about $17 a day – considered the poverty line in Saudi Arabia.

The kingdom has a two-tier economy made up of about 16 million Saudis, with most of the rest foreign workers. The poverty rate among Saudis continues to rise as youth unemployment skyrockets. More than two-thirds of Saudis are under 30, and nearly three-quarters of all unemployed Saudis are in their 20s, according to government statistics.

In just seven decades as a nation, Saudi Arabia has grown from an impoverished backwater of desert nomads to an economic powerhouse with an oil industry that brought in $300bn last year.

Forbes magazine estimates King Abdullah's personal fortune at $18bn, making him the world's third-richest royal, behind the rulers of Thailand and Brunei. He has spent government funds freely on high-profile projects, most recently a nearly $70bn plan to build four "economic cities", where government literature says "up to 5 million residents will live, work and play".

The king last year also announced plans to spend $37bn on housing, wage increases, unemployment benefits and other programmes, which was widely seen as an effort to placate middle-class Saudis and head off any Arab Spring-style discontent. Abdullah and many of the royals are also famous for their extensive charitable giving.

For many years, image-conscious Saudi officials denied the existence of poverty. It was a taboo subject avoided by state-run media until 2002, when Abdullah, then the crown prince, visited a Riyadh slum. News coverage was the first time many Saudis saw poverty in their country.

Prince Sultan bin Salman, a son of Crown Prince Salman, said in an interview that the government has acknowledged the existence of poverty and is working to "meet its obligations to its own people".
Prince Sultan said the Saudi government was "three to five years" away from dramatically reducing poverty through economic development, micro-lending, job training and creation of new jobs for the poor.

The Saudi government spends several billion dollars each year to provide free education and health care to all citizens, as well as a variety of social welfare programmes – even free burials. The government also provides pensions, monthly benefits and payments for food and utility bills to the poor, elderly, disabled, orphans and workers who are injured on the job.

Much of the welfare spending comes from the Islamic system of zakat, a religious requirement that individuals and corporations donate to charity 2.5% of their wealth; the money is paid to the government and distributed to the needy.

"Living in Saudi Arabia is like living in a charitable foundation; it is part and parcel of the way we're made up," Prince Sultan said. "If you are not charitable, you are not a Muslim."

Despite those efforts, poverty and anger over corruption continue to grow. Vast sums of money end up in the pockets of the royal family through a web of nepotism, corruption and cozy government contracts, according to Saudi and US analysts.Bsheer said some Saudi royals enrich themselves through corrupt schemes, such as confiscating land from often-poor private owners, then selling it to the government at exorbitant prices.

At the other end of the spectrum, many of the poorest Saudis are in families headed by women such as Shamir, who are either widowed, divorced or have a husband who cannot work. Under Islamic law, men are required to financially support women and their children. So women who find themselves without a man's income struggle, especially because the kingdom's strict religious and cultural constraints make it hard for women to find jobs.

The situation for many families, including Shamir's, is worse because they are "stateless" and not officially recognised as Saudi citizens, even though they were born in the country.

The UN estimates that there are 70,000 stateless people in Saudi Arabia, most of them descended from nomadic tribes whose traditional territory included parts of several countries. Their legal limbo makes it harder for them to receive government benefits.

Shamir, 35, lives in the shadow of a huge cement factory. The houses and streets are covered in a haze of smoke and dust. Her concrete house is down a narrow alley, where graffiti covers the cracked walls and litter piles up in the street. Her landlord is threatening to kick her out, and a local shop owner has cut off her credit for food and gas for her stove. She lives mainly on charity from wealthy Saudis who show up with food and clothes.

One recent morning, her children ran to the door to help unload food being dropped off by a middle-class Riyadh couple in an SUV. Shamir said donations help her pay for the electricity to run an air conditioner, but she does not have enough to buy school supplies for her children.

While middle-class Saudi youths have all the latest gadgets, Shamir's 14-year-old daughter, Norah, has never sent an email or seen Facebook. Her husband has a second wife who has another 10 children. Most of them are unemployed.

Shamir said her husband earned about $500 a month as a security guard until his health forced him to quit five years ago. She said she has tried in vain to find work as a seamstress or a cleaner.
"I've been patient all these years," Shamir said. "I hope that God will reward me with a better life for my children."

• This story appeared in Guardian Weekly, which incorporates material from the Washington Post