Sir Viv Richards: the personification of grace and menace combined

Happy 60th birthday, Sir Viv Richards – one of the finest postwar batsmen of them all who could reduce an attack to rubble 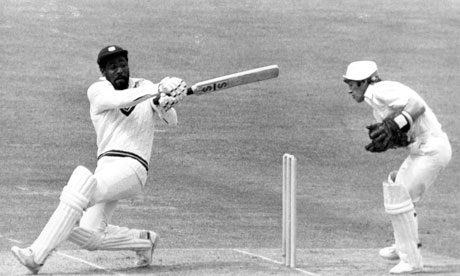 Sir Viv Richards on his way to 138 not out as West Indies retained the Prudential World Cup at Lord's in 1979 after beating England by 92 runs. Photograph: Hulton Archive/Getty Images

This I can see as clearly now as if it were only yesterday: pitch at Lord's, under covers for a week and more and as green as Paddy's Day, me with a new ball, and the start of a much-delayed, postponed and greatly reduced domestic limited-overs semi-final. The first delivery was spot-on, bang on length and line and, on pitching, it jagged back sharply off the seam and sank into the unprotected inside of the thigh of the batsman pushing forward.

The next was all but identical (the pitch marks, scarred on the grass, were within six inches of one another) and again the batsman came forward at it. Only this time he changed his mind midway, shifted his weight on to the back foot, and, clean as you like, thumped it with a vertical bat and high elbow not just over mid-off, or even the boundary rope, but over the corner of what is now the Compton stand and on to the Nursery. It remains the single most devastating shot I have ever seen. And Vivian Richards played a few in his time. What would he be worth today?

It is more than a year since last I saw him. Or rather he saw me, across an airport transit lounge, me en route to the Ashes, he for a tour of King and I shows with Rodney Hogg. "Hey Selve, what's happening, man?" He looked dapper, a porkpie hat perched rakishly in place of the familiar maroon cap, a little thicker round the face but still that Big Bad John "kinda broad at the shoulder and narrow at the hip" appearance that made him look as much like a top middleweight as the greatest batsman of the modern era. Even as he reaches three score years on Wednesday, he looks fighting fit.

So, from Singapore to Sydney, we supped a little and chewed the fat. There were things I wanted to ask him that I never had. Which of all the great West Indies fast bowlers of his time would he pick for his dream quartet? Andy Roberts, he said, his fellow Antiguan with an astounding cricket brain who was there at the start of it all; and the brilliant, much-lamented Malcolm Marshall. Then came Mikey, the great svelte Holding. And finally not the rumbling faithful Big Bird Joel Garner, but instead the brooding stringbean Curtly Ambrose. But, Richards admitted further, if he wanted someone to blast him a wicket, without fear, favour or consequence, there was none more chilling than Colin Croft.

Now tell me, I asked him, since it's a long time over, how do you think that bowlers – or specifically, me – should have approached the task of bowling to you. I had successes, but generally they would have been early on in an innings as he sought the upper hand and took calculated risks. Hard graft after that. You had to be aggressive, he said with some passion, aggressive. It mattered not if fast, slow or medium, spin, swing or seam, you had to demonstrate positive intent or you were shot from the start.

When, after he took guard, he wandered down the pitch, tilted his head back and, looking down his aquiline nose to eyeball the bowler, it was almost as if he was sniffing the air through his flared nostrils for the scent of fear. He wanted to feel the ball "sweet" off the bat from the off, and then he knew it was his day. Yeah aggressive, he repeated, he respected that.

But this was always easier said than done because of the way he set it up. There is an analogy with the buzz in a theatre before the curtain goes up on a great thespian. The wicket falls, but he allowed things to settle, waiting for the arena to clear, the celebrations (more muted in those days) to die down. The theatre lights dimmed and expectation became electricity. Everyone knew who was coming. And when he finally made his entrance, swaggering down the steps, cudding his gum, and windmilling his bat gently, first one arm then the other, it was a personification of grace and menace combined, the walk as unmistakable as had been that of Garry Sobers, to my mind his only rival as the finest postwar batsman of them all.

I put on a performance, he told me, it was part of my act. He wanted to dominate and the genesis of that process happened even before he closed the dressing-room door behind him. His reputation preceded him like an advance guard. It continued with the languid wicketwards saunter, the slow precision with which he took guard, the way he ambled down the pitch to tap down an imaginary mark, all the while looking for, and not always finding, eye contact with his adversary. Then he would smack the end of his bat handle with the palm of his right hand, a final intimidatory gesture.
There have been giants of the game contemporary and since, batsmen of vast pedigree and achievement: Greg Chappell, Lara, Tendulkar, Ponting, Dravid, Kallis, Sangakkara, Hayden and others. Each on his day could reduce an attack to rubble. But Richards had an aura given to no other. Truly he was scary. Happy birthday, Viv.
at March 07, 2012
Email ThisBlogThis!Share to TwitterShare to FacebookShare to Pinterest
Labels: aggression, batsman, cricket, intent, passion, positive, Richards