Ref BBC 3 March 2015
"Attractive" jihadist fighters can be "eye candy" to lure in British Muslim girls, a former extremist has said.
Ayesha - a false name to protect her identity - told BBC Newsnight she was taught to see the UK as "our enemy".
She now rejects that ideology, but said her ex-allies would regard the militant known as "Jihadi John" as an "idol".
Three schoolgirls recently left the UK, apparently to join militants in Syria - leading to questions over why British girls would make that choice.
Ayesha, from the Midlands, is now in her early 20s and said she was first contacted by extremists when she was a student aged 16 or 17.
She said a man sent her a Facebook message saying she was "very attractive" and telling her: "Now's the time to cover that beauty because you're so precious."
Ayesha said the message was "bordering on harassment" but it was the "best way I could have been targeted" because it played on her religious beliefs and told her she would "end up in hell" if she did not obey.
'Exciting'

And she said there was glamour as well as fear in what she saw.
"As a teenager I wanted to get my piece of eye candy and I'd take a good look, and all the YouTube videos, for some reason, they [the militants] were all really, really attractive.
"It was glamorous in the sense it was like 'oh wow, I can get someone who practises the same religion as me, who's not necessarily from my ethnicity and that's exciting'." 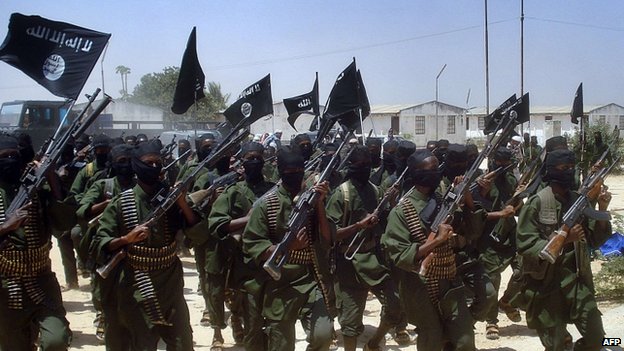 Ayesha was attracted by groups including Somalian militants al-Shabab
She added: "It was like, get with him before he dies.
"And then when he dies as a martyr you'll join him in heaven."
Ayesha was radicalised before the rise of Islamic State (IS), which has taken control of parts of Iraq and Syria, and was attracted by al-Qaeda and al-Shabab.
'Don't trust Britain'

"In some of the sermons we were encouraged that we shouldn't identify ourselves as British," she said.
Ayesha said she was told to view Britain as a "kuffar [non-Muslim] nation" that had killed many Muslims and was "our enemy".
"You don't trust the state, you don't trust the police, you don't send your children to state schools," she said.
She said she was told to view British women as "disgusting" and "practically like men".
But Ayesha said she eventually rejected these ideas.
She said the two main things which drove her away from the ideology was that it did "no justice to women" and it said followers "have to go and kill someone that's non-Muslim".
Ayesha said her old associates would praise Mohammed Emwazi - known as "Jihadi John" - the British IS militant who has apparently featured in videos showing the beheading of several Western hostages.
"They'd definitely consider him a role model," she said.
"He is someone they would be really proud of."
at March 03, 2015
Email ThisBlogThis!Share to TwitterShare to FacebookShare to Pinterest
Labels: attraction, dar ul harb, eye candy, jihad, kafir, kuffar, love, Muslim, religion, UK