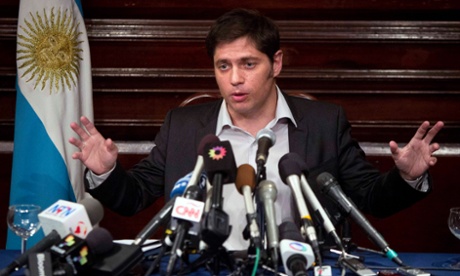 Argentina's economy minister Axel Kicillof speaks to the media at a press conference in New York July 30, 2014. Photograph: CARLO ALLEGRI/REUTERS
Argentina has fallen into default for the second time since 2001 after last-minute talks with "vulture" bondholders in New York failed to produce a deal overnight.

----
At a dramatic press conference in New York on Wednesday night, Argentinian finance minister Axel Kicillof declared that Argentina would not be held to ransom by the holdout bondholders, who are demanding to be paid in full on debt which the country defaulted on in 2001.
Kicillof said: "We're not going to sign an agreement that jeopardises the future of all Argentines. Argentines can remain calm because tomorrow will just be another day and the world will keep on spinning."
Shortly before the deadline, Daniel Pollack, the court-appointed mediator, confirmed that the talks had broken down. "Unfortunately, no agreement was reached and the Republic of Argentina will imminently be in default."
Earlier, the credit rating firm Standard & Poor's declared that Argentina was now in "selective default". The default comes two months after a US court ruled that Argentina must pay the holdout bondholders in full, saddling it with a bill of more than $1.5bn.
The vast majority (more than 90% of bondholders) agreed to restructure debts in 2005 and 2010, taking a big "haircut" – a reduction of more than 70% in the value of their investments in return for regular interest payments.
Argentina's last default, in late 2001, came after a major political and economic crisis; scores were killed in riots, and both the president and the economy minister resigned. But there was little sign of a panic in global financial markets this time, as the default was widely expected. However, it could add more pain for Argentinians, with the economy already in recession.
Pollack said: "The full consequences of default are not predictable, but they certainly are not positive."
The holdouts – branded "vulture funds" by Argentinian president Cristina Fernández de Kirchner – are US hedge funds spearheaded by the billionaire Paul Singer's NML Capital, an affiliate of Elliott Management, and Aurelius Capital Management.
Steve Ellis, portfolio manager at Fidelity emerging market debt fund, said: "We expect contagion to other markets to be fairly limited. This is a highly technical legal case and a selective default.
"Argentina was isolated from international capital markets for years so we don't expect the default to distort any global capital flows. However, there will be remaining risks around a longer term default which would have negative impacts on the Argentine economy. At this stage, the market will likely price in a delay of payments should the government continue to deposit coupon payments until they can reach a deal with the holdouts in 2015."
at July 31, 2014
Email ThisBlogThis!Share to TwitterShare to FacebookShare to Pinterest
Labels: Argentina, bond, debt, default, haircut, interest, ratings agency, US