The first politician to face charges over 2008 financial crisis 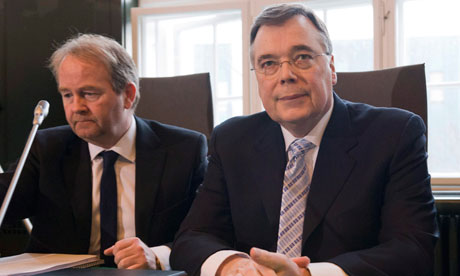 Former Icelandic prime minister Geir Haarde (right), and his lawyer Andri Arnason, appear at his trial in Reykjavik. Photograph: S Olafs/EPA
The former prime minister of Iceland has become the first politician in the world to stand trial over the 2008 financial crisis.

Geir Haarde, who was ousted after Iceland's three biggest banks collapsed and the country's economy went into meltdown, could be jailed for two years if found guilty of gross negligence in failing to prepare for the impending disaster. He denied the charges and claimed that "only in hindsight is it evident that not everything was as it should have been".

Haarde was instrumental in transforming Iceland from a fishing and whaling backwater into an international financial powerhouse before the credit crunch caused the economy to crash almost overnight.

The Icelandic parliament's "truth report" into the causes of the crisis that forced the country to borrow $10bn (£6.3bn) to prop up its economy, accused him of "gross negligence". He is also accused of failing to rein in the country's fast-growing banks, whose paper value before the crash had ballooned to 10 times the gross domestic product of the island state of 320,000 people. And he is alleged to have withheld information that indicated the state was headed for financial disaster.

The country's three biggest banks – Glitnir, Kaupthing and Landsbanki – went bust within weeks of each other after the collapse of Lehman Brothers in the US sparked the credit crunch in 2008.
"None of us realised at the time that there was something fishy within the banking system itself, as now appears to have been the case," Haarde told the court in the capital of Reykjavik on Monday. "I think it's illogical to think that I or anyone else in the government could have reduced the size of the
banks to a greater extent than was done at the time."

He is accused of failing to prevent the contagion from spreading to the UK by not insisting that Icelandic banks ringfence their overseas operations. The crisis sparked a diplomatic row with the UK as the demise of Landsbanki brought down its British internet banking arm, Icesave, leaving British councils, universities and hospitals more than £1bn out of pocket.

Gordon Brown, who was British prime minister at the time of the collapse, accused Haarde of "unacceptable" and illegal" behaviour over its failure to guarantee to reimburse UK customers of the bank. The British government stepped in to protect most savers, at a cost of £3.2bn but it is continuing to demand compensation from Iceland to cover the cost.

The crisis also led to the demise of Baugur, the British retail investor which owned stakes in House of Fraser, Debenhams and Woolworths.

Haarde, who led the right-leaning Independence party and was prime minister from 2006 to 2009, rejected all the charges as "political persecution" from the country's left-leaning government, and said he would be vindicated by the trial. He said Icelanders' interests were his "guiding light" and insisted that his conscience was clear.

The trial is expected to last until mid-March, with the court taking another four to six weeks to deliver its verdict.

Haarde has become the first person to ever stand trial at the country's Landsdómur criminal court, which was created in 1905 to hear charges brought against ministers. He was one of four former Icelandic ministers blamed by the "truth report" for causing the crisis, but parliament voted last year that he should be the only person to stand trial.

The others named in the report were the former finance minister Árni Mathiesen and former minister of commerce Björgvin Sigurdsson, and Davíd Oddsson, a former prime minister who was running the country's central bank at the time.